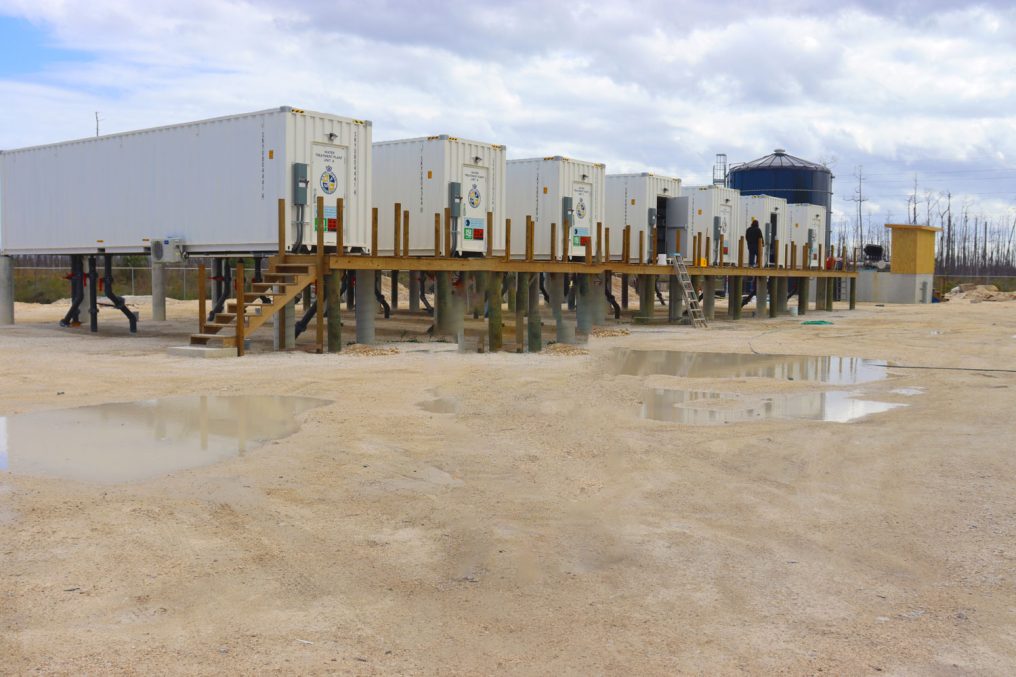 The Grand Bahama Utility Company (GBUC) is pleased to announce major capital investments of over $6.5 million for the island of Grand Bahama commencing with its new fiscal year that began on November 1, 2022.

These significant investments support a multiyear asset improvement plan focused on sustainability, climate change resiliency and automation that will improve the level and quality of service for the Island’s residents. This latest announcement is in addition to GBUC’s $5 million investment in a 3-million-gallon reverse osmosis (RO) system that was commissioned in October of 2021.

According to GBUC Chief Operating Officer Philcher Grant-Adderley, it has been a long road to recovery since the catastrophic effects of Hurricane Dorian but there is reason for optimism about the utility’s future. “There is no denying that Dorian had a long-lasting impact – not only our infrastructure but, most critically, on our freshwater lens. Our biggest wellfield was inundated with over 20 feet of seawater for three days and the consequences to the fresh water supply were devastating.”

The GBUC team worked with several non-governmental agencies, and international and local experts, as well as conducted numerous hydrological studies to find new sources of freshwater in higher ground areas that were not impacted by Dorian. “It was important that we not only repair the system but ensure that it was built back in ways to give the utility greater resiliency should we experience another major hurricane or significant storm event,” Mrs. Grant-Adderley continued. “We added 75 new wells and were able to restore potability to 70% of the island by July 2020. As a result of the devastating blow to our largest wellfield, we made the decision to invest in a $5 million mobile reverse osmosis system that enabled us to return full potability to the Island in December 2021.”

Grant-Adderley added that it has been a very costly exercise for GBUC as RO systems are extremely expensive to run, adding an additional $2.5 million to the utility’s annual operating costs. That, coupled with the approximately $2 million in uninsurable losses associated with Dorian including over half million dollars in costs to operate the free water depots for residents and 25% discounts given to residents for water usage.

Grant-Adderley further stated that the utility learned some tough lessons from Dorian and made changes to their business model to ensure the health and longevity of the system.  She acknowledged that, while GBUC has been able to achieve and maintain potability at World Health Organization (WHO) standards, it has also had to enact conservation operating measures to safeguard the freshwater lens for future generations. This includes running the water pressure at lower levels than residents are historically used to, although still within the Company’s level of service.

“We know what our customers were accustomed to, and we understand their expectations,” added Mrs. Grant-Adderley. “It has been a long journey and GBUC has been here with customers through it all. We promise to continue working hard to provide the quality service they deserve. We are thrilled to say that, as part of this latest $6.5 million capital investments program, we are planning an additional state-of-the-art one-million gallon per day RO plant for the western district, continuation of the meter changeout program, and strategic island-wide pipe and infrastructure upgrades. Investments in these areas will not only allow us to improve the water pressure for all customers, particularly those in the western end of the island, but also provide more capacity for the island’s growth, especially with major investment projects coming onstream,” Grant-Adderley concluded.

In the coming months, GBUC will be updating the public on the progress of its plans and provide project-specific information as plans develop. Stay tuned to their website at www.grandbahamautility.com and follow Grand Bahama Utility Company on Facebook.